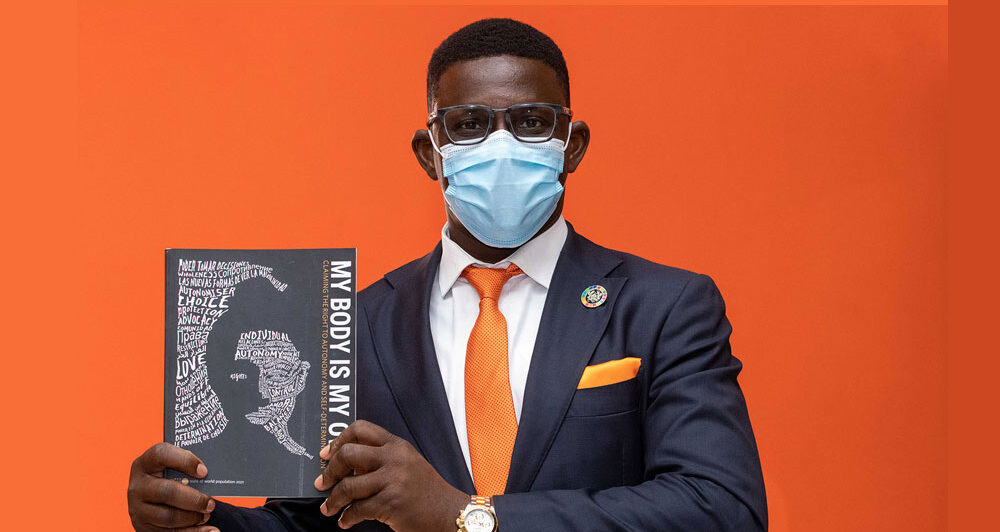 Launching the 2021 SWOP Report in Ghana

Investing in population to promote development

Investing in young people to realise their full potentials

The Government of Australia is a huge supporter of the work of UNFPA across the world, including in Ghana. Australia is a core contributor of funds to the organization. Over the years, the High Commission in Ghana has offered support for ending Sexual and Gender-Based Violence (SGBV) and promoting women’s rights as a result.

On Tuesday, 16 February 2021, I paid a courtesy call on the Australian High Commissioner, H.E Gregory Andrews to bring him up to speed on the work we have been doing and to mutually renew commitments to each other in our quest to achieve the UN Sustainable Development Goals (SDGs) by 2030.

Our discussions centered on possible collaborations with the High Commission in Ghana to achieve these transformative goals and promote gender equality.

To build a more solid partnership and mutually deploy the power of the media to inform and educate the general public,  I paid a courtesy call on the Office of the Director-General of the Ghana Broadcasting Corporation (GBC), Professor Amin Alhassan.

I took the opportunity to highlight the three (3) transformative goals of UNFPA which seeks to achieve:

The DG of GBC on his part welcomed the partnership and made it clear that his outfit exists to promote development through Journalism and are ever willing to lend support to the work of UNFPA in Ghana.

Faith-based organisations have the power to effect change in local communities, including promoting reproductive health and rights, gender equality, and population and development issues.

Joining the advocacy dialogue with muslim leaders on teenage pregnancy and sexual and gender-based violence, I reiterated the importance of understanding the role as  religious leaders and Muslim leaders specifically  in preventing maternal deaths and adolescent pregnancy; ending obstetric fistula; increasing  access to family planning;  ending child marriage in Ghana; advocating for the prevention and management of sexual and gender based violence; implementing community based interventions relating to the dynamics between social norms and religious beliefs; being a voice of the voiceless; and development of action plans.

It has been proven without exception that countries that pursued strategies providing the opportunities to their adolescent populations when they were at this stage of their demographic transitions were able to lift their economies out of poverty.

Climaxing its 16 days of activism against sexual and gender-based violence (SGBV) on Thursday 10th December, 2020, in Accra, the United Nations Population Fund (UNFPA), in an exhibition expatiated on cases of violence where victims also shared their experiences.

The campaign spotlights the actions being taken to end this global scourge, which is one of the most pervasive human rights abuses in the world.

16 days of activism run from 25th November, which is the International Day for the Elimination of Violence Against Women, through to 10th December, Human Rights Day.

In his Welcome address, Mr. Niyi Ojuolape, Country Representative of UNFPA Ghana, expressed his profound gratitude to the youth for participating in the campaign and for expressing their enthusiasm in fighting against SGBV.

He therefore explained that, SGBV is a silent pandemic that is raging within the country, however, It is time for everyone to rise and collectively put a stop to it.

According to Mr. Ojuolape, UNFPA partnered with the Ministry of Gender, Children and Social Protection (MoGCSP) and others partners to present a united front to combat this pandemic.

“We all have a role to play, so when you see a situation where someone is being affected by SGBV or a victim of SGBV, please report to the nearest authority so that his or her life can be saved,” he said.

Mr. Ojuolape, added that, “There are others who also suffer in silence because the society doesn’t encourage reporting. So these are major issues that we have in our societies. So there is sort of comfort for those who are confronted by these issues like victims and survivors who also need support and help in different ways.”

On her part, the Deputy Country Representative, UNFPA, Dr. Agnes Ntibanyurwa, added that acceleration of actions to end sexual and gender base violence cannot be done by one single institution, it calls for partnership, as we are ending it in this youthful place with art designs very young and champions.

“It’s not men or women issue, it’s not girls or boys issue, of course majority of these victims are women and girls but boys are also affected and no single person should be violent. Human rights day is calling not into policies of super just, but asking to stop all forms of violence”.

To her, sexual and gender violence should not be a fight only for 16 days. Saying, “it should be 24hours in a day, it’s 365 days in a year, 7days a week, everyone must serve, my family, my colleagues, you and all the people we have share the same responsibility to say NO to sexual and gender base violence.”

The Chief Director of Ministry of Children and Social Protection, Dr. Afisah Zachariah, underscored the need to eradicate SGBV now more than ever.

According to her, many people, especially the youth, have been victims of this kind of abuse and thanked UNFPA and its partners for using arts as the new avenue to showcase the plight of victims of SGBV.

Victims of violence experience devastating consequences including physical, mental, and psychological wellbeing. But it long-term, far-reaching effects, including persistent inequalities between men and women, which limit women and girls’ abilities to fulfil their potential is a risk we must avoid completely.

The global theme for the 2020 16 days of activism, “Orange the World: Fund, Respond, Prevent, Collect!”, is a wake-up call for all and sundry to work together and invest till we see a day when we will bring to zero all forms of Sexual and Gender Based Violence (SGBV).

Today, the renovated SGBV shelter was handed over to the Ministry of Gender, Children and Social Protection.  This adds up to the many interventions existing to ensure that women and girls have access to holistic support to regain their dignity and health. This shelter will go a long way to enhance the response to SGBV and safeguard the rights of vulnerable girls and women.

With the onset of COVID-19, the Kayayei have had to live their realities with the added effects of the pandemic on trade, income and health.

We can only imagine what the pandemic means for their livelihoods, welfare and that of their families. These women and girls who migrate from rural communities especially from Northern Ghana to urban centres, in search of greener pastures have to endure so many unfortunate experiences. Most of them do not have adequate shelter and have to sleep in the open at fuel filling stations, in front of shops or in open market spaces. This exposes them to a number of security threats and human rights abuses including sexual and gender-based violence, specifically, rape, sexual assault, harassment among others. Such experiences, leave them traumatized, but more than that, this exposes them to various negative reproductive health outcomes, like teenage and unplanned pregnancies, sexually transmitted infections and maternal and newborn health complications.

The Kayayei Assistance Project (KASPRO) was designed to address some of these challenges and provide assistance to a cohort of 500 Kayayei during this pandemic. Through the project 500 kayayei have been provided with sexual and reproductive health education and sexual and gender-based violence information, nourishment and essential items such as hygiene products, face masks and hand sanitizers. They have also received mentorship and business advisory training courtesy the National Entrepreneurship and Innovation Programme and skills training. With support from the National Health Insurance Scheme, we have also enrolled 500 Kayayei unto the scheme.

This Expo was organized to show the benefits we can reap when we make the right investments into the lives of the people, especially the vulnerable, in Ghana. Thanks to the Prudential Life Insurance Limited for supporting this project.

The United Nations Population Fund (UNFPA Ghana) has called for an urgent investment in time and resources to prevent a high incidence of domestic violence in various communities in Ghana.

Mr. Niyi Ojuolape, UNFPA Ghana Representative noted that despite the existence of several legal frameworks and institutions, a large segment of the population, especially women, adolescent girls, and children continued to suffer violence in all forms.

“Preventing and responding to violence against those that are vulnerable requires that we intensify our efforts systematically to address risk and protective factors at all levels, mainly; individual, relationship, community, and society.”

The overall goal of the 10-year Policy document (2009-2019) was to eliminate domestic violence from Ghana’s society, create family cohesion, and provide a peaceful environment to accelerate national development.

The Domestic Violence Act, Act 732 (2007) was passed by Parliament in June 2007 to protect women and children, particularly from domestic violence.

During the meeting, the Ministries of Education; Gender, Children, and Social Protection, the Judicial Service and Security Agencies were allowed to draw lessons learnt over the past ten years and strategize on the way forward.

Stakeholders would also discuss interventions as well as key achievements and emerging issues and trends of domestic violence in the country.

Mr. Ojuolape said domestic violence undermined the health, dignity, security, and autonomy of its victims. He tasked stakeholders to take into consideration the ever-evolving digital world, and reflect the needs and realities of women, girls, persons with disabilities and people in hard to reach communities.

Mr. Ojuolape pledged UNFPA’s commitment to partner with Government and Civil Society Organizations to continuously work to eliminate all forms of violence against girls, women, and persons with disabilities.

“To be called a feminist does not necessarily mean working for women alone, but contributing to ensuring balance and the peaceful co-existence of women and men”- Niyi Ojuolape.

International Men’s Day is marks the celebration of men who are contributing and making impact in their communities. Joining the Junior Shapers Africa for the International Mens’ Day Prize event, I stressed on the need to engage men and boys as champions to achieve gender equality and equity.

As we intend to be equal partners, it is prudent to recognise the fact that it is women who have suffered for the large part. And so, we must be a generation that will be altruistic to ensure men and women are partners.

In relation to zero sexual and gender-based violence, it is critical that in our response to ending violence against women and girls, we equally rope in men and boys, in order that most, if not all, move into becoming champions against VAWG rather than continuing to be perpetrators.

Today, I paid a courtesy call to the National Chief Imam of Ghana, Sheikh Osman Nuhu Sharubutu at his residence in Accra. The Chief Imam is renowned for his role in the promotion of peace and inter-faith unity amongst religious groups in Ghana. He is also a centenarian and is held in high esteem in the Ghanaian society.

As a member of the National Peace Council, he has contributed to efforts at ensuring peace before, during and after national elections in Ghana. He has also graced a number of UNFPA-led advocacy dialogues with Faith-based organizations towards the elimination of Gender-Based Violence and harmful cultural practices like Child Marriage and Female Genital Mutilation (FGM).

Today, I joined colleague Head of UN Agencies in Ghana, led by the UN Resident Coordinator, Mr. Charles Abani to sign the book of condolence in memory of the life and times of His Excellency, Flt. Lt. Jerry John Rawlings, Former President of the Republic of Ghana, who was instrumental in returning the country to democratic rule in 1992 after a series of successive coup d’etats.

H.E. J.J. Rawlings died at the age of 73 and is survived by his spouse, H.E. Nana Konadu Agyeman-Rawlings and, former First Lady of the Republic of Ghana and four (4) children, Zanetor, Yaa Asantewaa, Amina and Kimathi Rawlings.