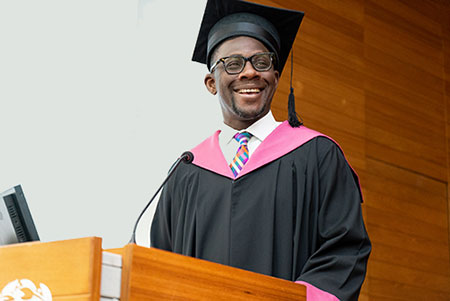 Niyi was born in Akure, Ondo State, Nigeria. His father, Justice Edward Ojuolape, is a retired High Court judge of the Federal Republic of Nigeria.

Niyi started his educational journey and had his SSCE at Federal Government College Ido Ani, Ondo State in 1986. He obtained his Bachelor of Science Degree in Banking and Finance from the Ondo State University in 1990, as well as a Master’s degree in Finance from the University of Calabar, Cross River State. Niyi also holds a second Master’s of Science degree from Bocconi University Italy in the Management of International Organisations and was named the valedictorian of the 2019 class.

Niyi is an Alumnus of John Hopkins Center for Communication Programs on Leadership in Strategic Communication, Baltimore, Maryland USA. He is also a member of the Nigerian Institute of Public Relations (NIPR) and Society for AIDS in Africa (SAA). 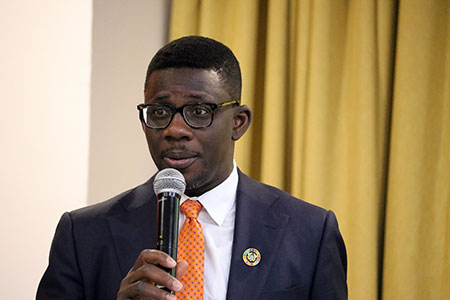 Niyi held the position of chief program officer of donor coordination for the National Agency for the Control of AIDS (NACA) in Nigeria, where he coordinated the communications, donor activities and the development of resource mobilization strategies that led to an increase of $150 million in funding for the Agency’s portfolio over a five-year period. He has also worked as the special assistant to the Minister of Health in Nigeria – Late Babatunde Osotimehin. He played an integral role in the success of the Ministry of Health’s supervision of approximately 4000 staff members and a budget of about $1.2 billion. He also worked on several World Bank-funded projects between 2002 and 2005. 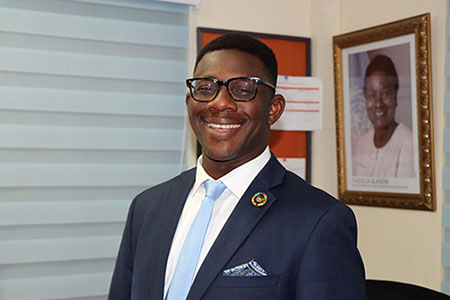 Niyi was appointed as the UNFPA resident representative in Ghana in July 2017. He has mainstreamed youth issues, zero gender-based violence, and comprehensive sexuality education (CSE), as core strands of the organization.

Prior to this role, he served as UNFPA’s Chief of Staff at the Headquarters in New York and before that, as the Special Assistant to the Executive Director, Babatunde Osotimehin. He also served as the Deputy Representative of UNFPA in the Democratic Republic of Congo, liaising with political influencers within government, colleagues, and Development Partners for the initiation of the landmark advocacy on Demographic Dividend.

As the UNFPA Country Representative in Ghana, he initiated several youth-centric and gender-inclusive programs. Of note is the Youth Leaders (YoLe) Fellowship Programme which is partly implemented by Impact Hub Accra. The program selects 16 graduates from Ghanaian tertiary institutions annually following rigorous screening, to intern at the UNFPA Ghana country office where they develop several skills ranging from: innovation, youth and gender advocacy, and community development. Consequent on this, he led the completion of a youth innovation hub named ‘The Orange Loft’, and which was commissioned in June 2019 by Natalia Kanem, Executive Director of United Nations Population Fund.

Ojuolape is a member of the Advisory Board of the Coalition of People against Sexual and Gender Based Violence and Harmful Practices (CoPASH), a joint initiative of the Second Lady of the Republic of Ghana, H.E. Samira Bawumia and UNFPA Ghana. He has leveraged on the relevant public institutions like the Domestic Violence and Victims Support Unit (DOVVSU) and Faith-Based Organisations to increase awareness about GBV in Ghana and build capacity for improved response.

Niyi has outstanding skills in strategic planning, change management, stakeholder analysis and communications and advocacy. He is fluent in English, French and Yoruba languages.

Niyi is happily married and blessed with three lovely children.